Anarch and the MWL by SimonMoon

Written in one day and yet both masterfully articulate and 100% on point. Anarchs are potentially in for a rough time. I am with you on Team RegAnarch. I remember the days of hard lockouts in the late-game following a purge. There aren’t really any reasons to not play Shaper once this is in effect.

Thanks for the timely and solid article @SimonMoon

I’ve been yelling at everyone for basically weeks about how potential David / actual David mwl would / is terrible, so I figured I’d put all my thoughts in words.

Also inb4 virii isn’t a word. Yes I know that but I like saying it and everyone understands what it means

Why no mention of Null?

I think Null is pretty bad is the chief reason. Doesn’t fix Lotus Field problem so you still have the same massive Lotus Field / consistency deck building problems. Additionally you give up on using a host of other strong Anarch ID’s which I think are simply higher power.

Great article, thanks for sharing your thoughts! As a non-anarch player, it’s nice to get this kind of nuanced perspective on why D4 was a bad include.

Yeah, also agree with most stuff here (apart from liking Noise more and Dumblefork less). Playing RegMaxx was some of the most fun I’ve had playing Netrunner, and the fact that that style of deck is essentially totally wiped out is very sad.

While dominant decks need to be dealt with, putting all the good, broadly useful cards in the game on MWL is not the way to do it. The general effect of that is to make decks that instead lean on situationally strong but high variance cards better - and those kind of decks tend to shift the emphasis towards matchup luck and deck building choices over gameplay choices.

I’m sincerely hoping more cards will come out this cycle to make the anarch classic breaker suite more viable. (Null is already a good example, but maybe there will be more?)

I don’t play Anarch much anymore (I’m a shaper at heart), but I agree the D4 is a core anarch card that they need in order to deal with big ICE. Putting it on the MWL along with Faust and Wyldside is overkill.

RIP Valencia, was happy to bring you back, but looks like MaxX wants some more time from me.

Do note that we are promised a card that is “combo’s with Null in a pretty OP way”. (My bet is on this being Black Orchid which is also a pumpable code gate breaker with fair looking numbers from what we can see.)

We also have quite different perspectives on the MWL’s purpose: I think nerfing individual cards that are too strong (a la David) is a perfectly fair and sensible use of it, rather than purely ‘deck level’ balance.

Good call. It looks like some sort of recursion card?

Shaper also gets a Decoder. How will it compete with CyCy? Decoders for everyone! Except…,Crim?

Ahh, but do you know what deals well with DNA Tracking? 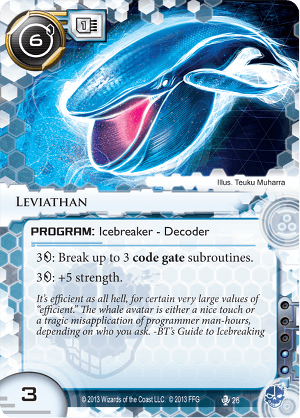 They may also be getting a real decoder, though their current options seem fine.

Viruses, from someone that doesn’t understand Latin

While dominant decks need to be dealt with, putting all the good, broadly useful cards in the game on MWL is not the way to do it.

I think that the concept of the MWL and the sort of functional errata we have (it looks like we have a theme of only functionally errata-ing deckbuilding aspects of cards, not gameplay aspects) are both somewhat poorly targetted and not quite sure what they’re trying to achieve.

The MWL is supposed to deal with cards that are just a bit too effective, but does nothing to decrease the efficiency of those cards. It only means you can play slightly fewer overpowered cards in your deck! In terms of the actual use of the MWL, the cards going onto the MWL (in both batches so far) seem very clearly targetted at cards that “combo” in popular decks. In other words it seems that it is being used as an attempt to take particular deck types down a notch, not individual cards.

Errata to deckbuilding aspects of individual cards (one per deck, unique as a pseudo-deckbuilding element) again don’t deal with broken cards. They just affect decks.

Trying to target decks through individual cards in this particular way (rather than actually fixing problem cards) is a tricky proposition: decks are a constantly moving target, knowledge of the knock-on effects is always sketchy and it always causes a lot of unnecessary collateral damage, reducing the possible variety of deckbuilding.

The approach taken does mean that there is slightly less pressure for card reprints (which I presume is the reasoning), but at the cost of being a poorer fix in game design terms.

I agree that Anarch was hit hard by the MWL update but I do not quite understand why Anarch players (and I’ll admit to playing Dumblefork competitively for months now) feel it’s their god given right to have clone chips. Criminal player rarely have them (and rarely have Levy … gasp). If the semi-standard 2 clone chips are dropped from Anarch builds, that pretty much covers the influence for moving to 1 d4v1d or 1 faust as a supplementary breaker (with corroder + mimic). we’ll see how the meta shakes out but I don’t see a clone-chip-less Dumblefork deck being clearly worse than any criminal deck (and I think likely better). Sure, you have to pay 3 inf. for the best draw engine in the game but still better than being the suckers that have to use earthrise hotel, fisk, and drug dealer.

Truly excellent article that articulated a lot of the thoughts stumbling around incoherently in my head. I like the analysis that D4v1d was fair and probably could be left off, and totally agree that this pushes Anarch away from fair decks and into degenerate Apocalypse-Siphon land. I’ve always loved reg-ass Anarch but it’s strictly tier two now. Oh well.

While Whiizzard is still functional, and has an ID ability that’s simply too good in the present meta, Noise looks pretty hopeless now. I know a lot of people don’t like Noise as a top tier deck, but I always find Noise games really interesting. He’s very difficult to play against because of the distributed pressure on centrals (Lamprey for HQ, Medium for RnD, virus mills for archives, Imp for both HQ & RnD) and forces the Corp to attempt to score out quicker than usual. More so than any other runner, playing against Noise feels like a mini-game within Netrunner and now we’ve lost that.

I do not quite understand why Anarch players (and I’ll admit to playing Dumblefork competitively for months now) feel it’s their god given right to have clone chips.

It’s more their god-given right to be able to play their own faction’s cards. Five cards on the MWL is less about “well now we can’t fit in clone chip” than “well now we can’t play this archetype at all”. A lot of Anarchs played a Clone Chip or two at 3 influence and it felt fair. Anyways, not to say it wasn’t deserved, Anarch was dominating the meta.

I disagree that you can’t play Bhagat Whizzard with the new MWL… it only lost 2 influence, you can replace 1 parasite and 1 d4vid with 2 more Deja Vu. Anarchs should have to make touch choices on influence, the way Criminal always has (ie choosing between good breakers and recursion).