Feeling down about Netrunner

The problem with traps is that it’s too big of an investment with too little payout.

Good thing FFG fixed that for you! 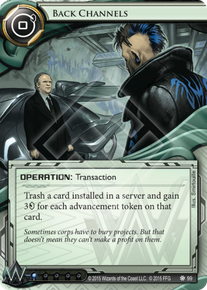 It seems like the current decks are good enough that new expansions are only for improving existing decks, or bringing a formerly top deck back to the top

And I don’t even consider myself a particularly innovative deckbuilder, those were just the things that jumped out and punched me in the nose when I ripped them datapacks open.

Two of my four currently built Runner dex are Iain Source/Film Critic, and Geistpocalypse. Both are fun and not the norm.

Surfer Quetzal is still the most fun you can have running

Haven’t had the source succeed in stopping me from doing anything yet, when its been coming out I look at it and think, no this comeback is not a thing what are you doing

But I’ve probably been lucky

Surfer Quetzal–I mean, the ice still has to be Barrier, so it’s tricky to pull off, no? Corps will especially be reluctant to rez barriers to begin with against Quetz.

There are ways around this. FAO+sot/deja and paintbrush can get you into most servers.

We had some good fun this weekend with Geist Apocalypse as well. 8 deep remote? Rezzed and advanced swarm? What is going on wherever you are?

Yes, otherwise Geist can get in! =-p (It was a personal record of mine.)

I just Blue Sun’d that ice.

My fun Netrunning experience was playing against @Secret_Ox on OCTGN the other night as Whizzard–I was putting on the old Whizzard shuffle and feeling like I had the game under control, and would close it out shortly. I saw Scorch in his hand but had a money advantage and 5 points of my own, and Medium with a counter or two on it. F12, pass turn.

He was NEH, with a Breaking News and Beale scored. Since I was so confident, I took some time to check out my fingernails, bite one off. Bad habit, for sure. Anyway, I took a look up to see what he was doing and I noticed I was dead.

Did you survive Geist “Hacking The PlanetTM”?

Or did you just Crash and Burn…?