This has already been discussed surely, but two clicks to score is not nothing. If you value clicks roughly at two credits then Film Critic doesn’t really buy you much vs NAPD.

Does this really turn off “when accessed” effects? The agenda is still accessed, right?

Whenever you access an agenda, you may host that agenda on Film Critic (the agenda is no longer being accessed and is uninstalled).

The best way to think of it is like Femme, Film Critic kicks in first, because it’s a runner card on the runner’s turn, then the agenda is no longer accessed so the agenda’s effects can’t fire.

So would the “on access” condition still be preempted if the agenda were accessed on the corp turn (e.g. Gang Sign, Raymond Flint)?

The on-access effects of agendas would work if that agenda was accessed on the Corp’s turn, yes. The Corp’s card effects happen first on their turn.

These card-order flip-flops also happen with An Offer You Can’t Refuse, making Femme cost 4 for a Tollbooth for example.

This has already been discussed surely, but two clicks to score is not nothing. If you value clicks roughly at two credits then Film Critic doesn’t really buy you much vs NAPD.

It buys you timing of when you take those two clicks, though. Being able to go in and check on an NAPD when you don’t have time to cash up first in a turn might be vital to stopping a score. Similarly, if the Corp is trying to score an NAPD with Caprice protection and a 5c runner, they can no longer bid 2c just to ensure the runner can’t steal it this turn.

That said, against RP especially the clicks are a pain, because RP can just sit on a Snatch & Grab and use ELP/Eli again to encourage you to spend clicks in order to prevent Critic-use that same turn.

more means dead draws and more cards in your deck that don’t fuel the fire.

I agree with the second part, and in the match-ups where it’s dead the first is true as well… but it’s not like Clot in that there’s only value in having one at a time.

Sure, with one you can cycle agendas off of it and into Archives if you need to. But with two Critics multiaccess remains pretty strong in most of these situations. If you see an NAPD and a Future Perfect, say, you can grab both, and nab the 5 points next turn so long as they remain untrashed.

Not ideal, or even always advisable, but it means that running two of them, at least, isn’t as bad as running two Clots would be (especially since they aren’t tutorable really, like you say).

Film Critic can only host one card, right? It’s totally possible to forcefeed the Runner two agendas Haarpsicoord style as a Midseasoned deck, most likely NEH. And with Explodeapalooza replacing NAPD every agenda is must steal.

I really like Film Critic it also enables one-big-run decks like Nasir and Kit and Stealth Hayley/Andy. They were practically unplayable in a SEA/Midseasoned meta.

Just host the second agenda and let the first agenda fall into archives.

Doesn’t Imp already do most of this?

Imp is definitely a good stopgap against midseasons and TFP but the difference between taking a shot at a psi game then moving an agenda to archives, probably protected by ice like pup or crick, so you can take another shot at it is substantially worse than just nabbing it on the first go. Also, imp generally gets purged immediately, so you’re only going to have one turn to land it. Resource hate is pretty sparse so film critic is free to loaf around until you need it.

Anything that helps tamp down the slot machine that is the Noise of Corp (Butchershop) is not too bad a thing, IMHO.

However, like Mr. Litzinger, I believe the game is better when the Corp is better. Thing is, there haven’t been too many cards arriving backing up his belief.

I agree that good corps (or at least corps better than they are now) makes the game better. Do you think the attempts they are making in D&D to expand the tagging game (and hence resource vulnerability) will help?

I guess if you’re not playing Anarch, but why would you do a silly thing like that?

look at the noise list. no plascrete, no IHW and resource driven econ. There are weaknesses to exploit but they require a shift in corp lists that hasnt happened yet.

whenever the runner is strong imo you have to acknowledge this as the corp and shift to a strategy that assumes the runner will be accessing more cards. + Snare, + cheap taxing ice, - mid range ETR… If the runner is dominating the long game then your money has to shift to bursty transactions and you have to speed up and put on pressure before they can build the engine.

as for film critic i dont see what gets cut to fit it into most of the popular runner lists. they are tuned so tightly it doesnt take much change for consistency to suffer.

Using imp to combat midseasons is fine, but very awkward.
You do actually need to get 7 points to win.

as a runner, Film Critic is awesome.

no net damage on Fetal AI, no 2c to steal
no paying to steal NAPD
no psi game for The Future Perfect
no Punitive threat
no Midseasons threat

(some of this gets turned around on the corp’s turn through Gang Sign or An Offer You Can’t Refuse, etc.)

also, FC is not unique, though i’m not sure if i’d even want to host more than one at a time (could wait to score two agendas in one turn to win the game i suppose)

now, as a corp, i’m also not actually scared of Film Critic. of all the things it bypasses, one thing that often gets forgotten is currents. if you want to annoy the runner, start playing currents and watch them squirm as they think about swapping out Surveillance Sweep or having a mountain of tags dumped on them or a gun pointed at the back of their head.

tagging and trashing Film Critic is also another strategy (which will be quite prevalent after D&D i suspect). and oldie but goldies Snatch & Grab. 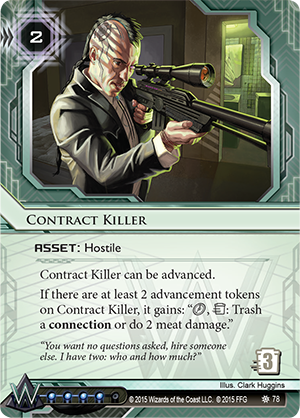 You do actually need to get 7 points to win.

No, you just need to stop the corp from getting to 7 points to win. As a Noise player, you should know this better than anyone!

Against Astroscript Pilot Program, this is unfeasible. If all you do is Imp agendas vs. butchershop they will just Astro Train you.

Imp and Film Critic are both equally impotent against Astrotrain, but at least Imp has tons of other uses too. Film Critic doesn’t do anything else and can’t be tutored.

I guess there’s Hostage, but that’s kinda rough on influence and deck slots for most non-Criminals.

I guess if you’re REALLY worried about accessing agendas Film Critic is a better choice, but 9 times out of 10 I’d rather just slap a single Imp in there and call it a day. It puts in enough work in non-Film-Critic situations that the extra utility should usually be worth more than what you give up against Future Perfect.