For those unaware, Day 9 is youtuber that has a pretty fun show called Spell Slingers where he plays MtG with sort-of-famous and “sort-of-famous” people.

The show is also sponsored by WotC.

Seemingly out of nowhere, he chats about having a blast playing netrunner and how awesome it was to play. Some pretty cool kind words for our favorite game. And since I’m a fan of his (I think he’s a good ambassador for nerdy card games), I was pretty excited, even if the timing was kinda bad.

Then my buddy incepted my brain with the following idea: It’s kind of interesting that a game that has recently “returned home” to WotC gets some attention and a signal boost from a YouTuber that is sponsored by WotC.

So: coincidence or nefarious scheming by an evil corporation?

I doubt it. If it’s true, I’ll play it, but I don’t believe WotC will do anything with the license. Sure, it can be a good game. OR IT COULD BE A NEFARIOUS SCHEME!

Day9 had a habit of randomly going off on whatever game he has been playing and I feel like if WotC was going to pay to promote a new property, they would delay till it was about to be released.

Also, my friend at WotC said they were surprised by the news when it happened and most in-house just found out it was canceled when we did. I’ve also heard there is issue with the duel license. Most of all, FFG dropped it because it wasn’t making money so WotC immediately jumping to invest in a property that was just proven to be a money-loser seems especially discouraging to any hopes.
As much as it was gaining momentum, right now the player base seems to be rapidly shrinking. Between this forum and reddit there aren’t even that many posts per week. For a world-wide game, having such a tiny number of posters is extremely telling to it’s value, commercially.

Although it would of course be cool if Day9 went on some crusade of course. I feel like the game was just a year or two from finding a whole new energy as Boggs was going to be a third iteration of design. A few more rotations could really have smoothed out some of the less elegant early choices and the slow, 25 year evolution of the game has really been a work of art.

It’s funny, AnR is that game that grabs hold of players because of how good it is, but it’s barrier of entry (both thematically and rules-wise [some folks don’t like the cyberpunk theme; some folks get lost in the actual rules of the game]).

I kind of equate it to that indie darling of a band that Really Famous Bands Love and fans of the band love, but based on the inherent quirkiness and style of the band, they will always struggle to “push through” to the main stream.

As it stands, I love AnR going “underground” with the Niesi Program. However, should another official iteration of Netrunner surface AND it becomes a huge success, I’ll be one of those old farts saying, “I remember when it was just me and 10,000 other players around the world playing this awesome game. I can’t believe AnR went corporate. The earlier albums were WAY better.”

Any chance you can provide a link (and timestamp)? I checked his channel and didn’t see any recent Spelll Slingers episodes.

oh nothing from his show, sorry if that was misleading–the signal boost came from his twitter feed where he was talking about the game.

Thanks for the clarification, did not make the leap that chat==tweet. I found the tweet:

Spent the evening playing Android: Netrunner and what a BLAST it was! Really really cool card game -- I was the corporation protecting my servers from this BASTARD hacker who kept stealing all my shit. He wound up stealing everything and I lost POWER TO THE PEOPLE

Just wanted to check to see if he was talking about FFG’s version or WotC’s version. Pretty clear it’s the version we all know and love.

As it stands, I love AnR going “underground” with the Nisei Program. LOL. No wonder I got new twitter followers lately. I responded to that thread letting them know that NISEI exists, without realising that the guy is famous.

Time to take those folks from NetCurious to NetRunner.

Yeah, he’s up their will Pewdiepie for big name gamer-nerds.

Did I choose the right time to post this on there then?

My middle name is #dank. My surname is #Netrunner-#Memes. Yes, it' a double-barreled toff surname. https://t.co/nakLiaL8Vw 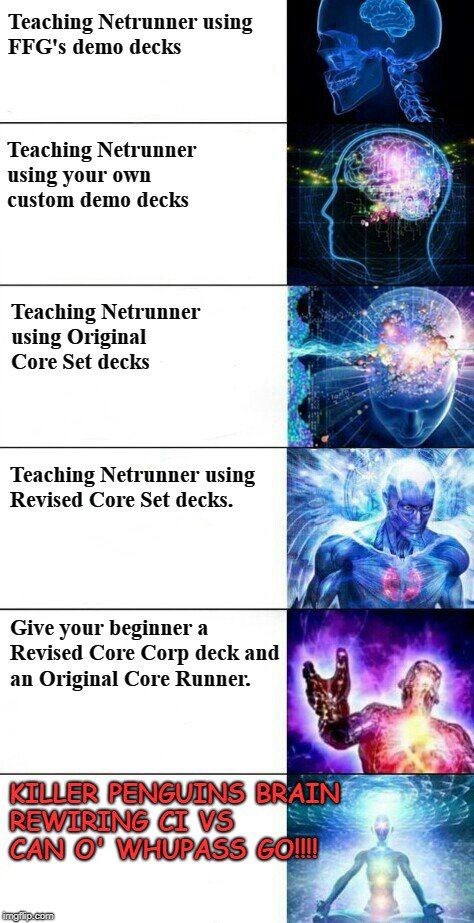 Even if I didn’t understand all the words I was reading, I would demand to know more