As I play games of 7-point CI online I sometimes find really close situations where I’m not sure if I can combo, take a screenshot, and figure it out after the game. Sometimes these make really good logic puzzles, hence this thread to perhaps start a nice collection of them.

Here is my most recent decklist, and here is @mediohxcore’s writeup with videos. I put some example combos for reference on my decklist description. Unless otherwise mentioned all puzzles will use this list (no 2nd interns, no 3rd SFSS, etc).

Here’s Puzzle #1. Note that the interns is stranded in your hand. Can you win through 1 clot (only need to make CVS once)? Hard mode: through double clot? If not, what’s the minimum extra cards/creds you need? 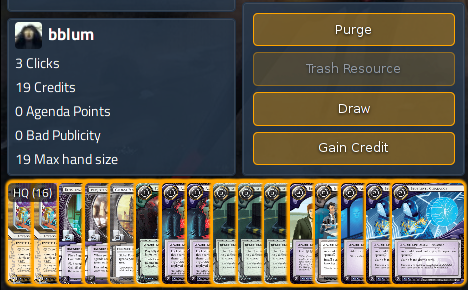 The best solutions so far are $12 to win through single clot $8!! by Niles, below, and $19 through double clot; solution spoiler

More puzzles to come eventually. Submit your own and so forth. Use [spoiler] tags please.

Already 10 people have clicked on the solution spoiler but nobody has replied with their attempt. I am disappoint!

Here’s a warmup, Puzzle #2. Combo through single clot. One of your 2 SFSS stranded in hand. 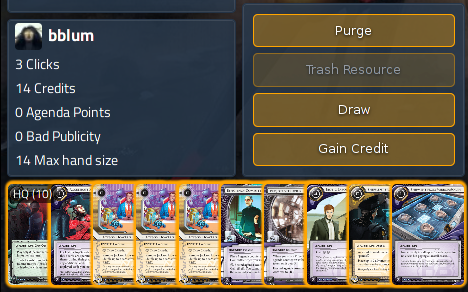 Puzzle #3, a slight variation (single clot again, but no mirrormorph in hand): 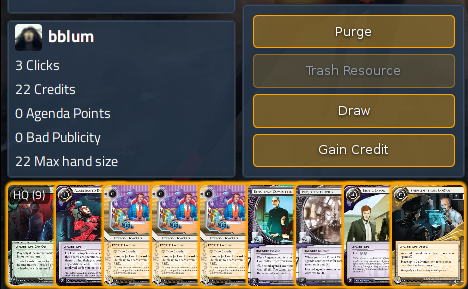 Edit: Puzzle 3 can be done in 18 rather than 22 by resequencing pile #1 to include a SFSS.

This nonsense is too hard for me, Ben. I’d rather slam Oaktowns behind Hives and hope the Runner can’t get in. All this math stuff is for the champs.

Going for it when I get home, watch this post. How do you use spoiler tags? The example in OP doesn’t do it apparently.

Guess I’ll try hard mode? Or let me know if I whiffed on something here, but I don’t think I did. Only one interns makes this tougher than other versions.

but nobody has replied with their attempt.

You can’t make me!

Could you number these puzzles so we can keep our solutions straight?

A thing of beauty. 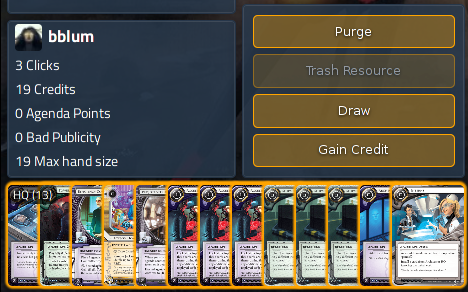 How do you use spoiler tags?

It apparently doesn’t work if you have paragraph breaks (ie 2 newlines in a row).

Can you give me an ELI5 example nothing is working for me. Is it supposed to be [spoiler]/spoiler], < Spoiler>/Spoiler>, or what? Thanks.

Okay, then I have no idea what I’m doing wrong why is this part harder than the puzzles

Great solution, btw. Bonus points for being possibly as cheap as $6 if you have 5 or more cards to reuse.

You miscounted credits by 3, leaving 1 cred off the cost of each AD pile. It’s otherwise structurally the same as the solution I gave.

I think the real question here is: how do you sort your hand on Jinteki

I’m going into goldfish mode after each game, and reconstructing HQ by hand, to make it look nicer. Same reason as why there’s not a lot of useless ICE and duplicate mirrormorphs and so forth.

Figuring out which cards are which in an unsorted HQ in a real game sucks (I miss OCTGN…).

Puzzle #4, Fixed for one Clot

This answer doesn’t get the interns out of your hand before your pile 2.