I’m a noob. I am still learning tons of things about the game. I keep walking into Jinteki and getting wrecked by all these mean boys from over at the Cobra Kai Dojo. Like Daniel LaRusso, I keep getting beat and I’m not sure what to do about it.

What I need is a Netrunner Mr. Miyagi.

So here is your chance.

Distill your best training and teaching rules for Noobs. What are the fundamentals that a Noob needs to develop to build a foundation for more success down the road?

Like Myagi, I cannot teach you these things with words. You must experience them to know their true meaning.

That means playing. Lots. Playing with the intent of understanding.

On the Corp side:
Play a NEXT or Titan Rush deck, with few options besides scoring out. Play it until you win. Learn to trust your ICE.
Play a Replicating Perfection deck, to help you recognise scoring windows. (The scoring windows with RP tend to be big and obvious, so it’s a good start.)
Play a HB never-advance deck, to learn what it truly means to “tax out” a runner.
Play some kind of PE deck, to understand the subtle mindgames that go into Netrunner. Play it until you understand why you won or lost certain games.

On the Runner side:
Play Adam. He’ll show you the meaning of aggression, like no runner before him. Learn not to be afraid, and more importantly, learn when to hold back.
Play a Siphon-spam deck. They’ll show you what economic pressure can do, and how to exploit holes in the corps strategies.
Play a Nexus-Kate or Sunny deck, or even Panopticon Haley. They will teach you how to win the long game versus any Corp, and how to properly camp remotes.

You will be frustrated, you will lose. You’ll wonder why you’re bothering with this junk deck. But keep at it, keep honing your skills. Every game you play will teach you just a little bit more about the gameplan you’re running, even if you don’t feel it at first. When you’ve conquered a style, move on. Eventually, you’ll have learned the digital Karate we know as Netrunner without even realizing it.

I’ll second @pang4’s advice on the runner side:
Playing Adam is great for learning fundamentals of what you want to do as a runner (run every turn, trash everything, access cards from HQ). You will also learn how painful it is to go to 0c, but more importantly you will learn to bounce back from it quickly.

Playing as cams Hayley is fun, and reasonably easy to do on Jinteki (it’s easier to keep track of all your abilities, credits, and 0 time spent shuffling). Since it’s come up several times today, I’ll link my cams deck again.

I’d also like to suggest Apocalypse Kate. To learn the value of board state. The only thing you need to know about apocalypse Kate is you should always be playing Apocalypse if you think you can actually land it.

On the corp side, I think playing dedicated rush decks can be instructive, but you will probably lose a lot of games. I’ve tried NEXT Design a number of times, and I just don’t think it’s a particularly good ID. Titan can be a lot of fun, but Weyland also has a hard time winning. I think most of what you learn from playing rush decks is you really need something more late in the game to score the last agenda. I’d try to find a modern Foodcoats deck to try out, that fits into more of the never-advance game plan/tax the runner out, but it has been made much weaker by Rumor Mill.

PE is a lot of fun. Learning how to game what the runner is thinking is fun, but it’s really best if you can play it in person to hear from the runner what they think is going on. I used this deck about 6-9 months ago and enjoyed it a lot, although at 11 Agendas, I don’t think it’s what @pang4 had in mind.

Thanks for this advice! I will spend some time doing these things.

Is it better to play in the competitive room (even if you are not that good) than the casual? I get the sense that you run into lots of jank in the casual room that might not be great for learning how to play good decks.

When it comes to Casual vs Competitive rooms…

You’ll find only tuned decks, that people are ready to take to a tournament with the plan of Winning, in Competitive.

I’d say that while you run into jank in Casual, Good Decks are able to deal with jank. I’d boil it down to ‘Do I feel like this deck could potentially win a tournament?’ if I say yes, then I’ll hang out in Competitive. Usually I’m just tweaking and adjusting and not yet ready to say it could win anything.

You’ll note that I generally divide the two rooms based on decks present in the room… The only player difference I’ve found is that in Competitive people tend to be aware of relevant rules a lot more.

Howdy folks, The idea recently came up through some discussion that people would be interested in starting a Netrunner Mentor program. The general idea behind the program is that we would pair up experienced players with players that are looking to improve and they would play a few sessions “over the shoulder” using screenshare on OCTGN or Jinteki.net. The program can range from beginners trying to learn basic strategy, lower intermediate players that want to improve, or people who want to improve in a specific deck (PPVP Kate, Noise, CI shutdown). On the mentor side, we have no official qualifications, if you feel comfortable mentoring someone, feel free to sign up as a mentor. It’ll be up to you and your partner to decide how you want to organize your sessions, but I’m thinking 3 sessi…

There hasn’t been a whole lot of activity lately, but maybe a lot more mentors will have more free time now that the competitive scene has slowed down for a lot of us. It’s worth putting a post in there or scrolling through the last few post and see if you want to direct message anyone offering to mentor.

You’ll find only tuned decks, that people are ready to take to a tournament with the plan of Winning, in Competitive.

This is not 100% true. I ran into all kinds of Sandburg jank and whatnot while testing a stealth Kit build for Nordics (ultimately wasn’t able to go there, sadly). Also, there’s people who are in the process of tuning their decks, which you can’t do in casual, or testing some actually promising jank (e.g. Panopticon Hayley at its conception). Sure, you will also see a lot of actually competitive decks there but it’s more like: no stupid garbage decks.

In casual you can win with anything. Literally anything. So don’t go there if you want to actually tune a deck.

Garbage decks make up 100 of competitive decks in the room. {Brag alert!} You can still win with jank against the right deck, and that more than anything tells you what’s really going on with the decks. Does it fills to econ pressure? Ice destruction? Link? Traces? Asset spam? Just make sure it’s jank you know by heart if you dare take on the gauntlet. Play draft though

I’ll second Jinteki PE as an important tool to learning how runners think.

Since most of what you’re doing is laying snares (some of which are literal Snare!s) you have to predict the runner’s behaviour - what will they read as a bluff? What risks will they shy away from?

Even if you’re not always trying to steer into net damage kill and or 1000 Cuts sapping of clicks, you’re always trying to steer the Runner in some way or another as Corp - to expose themselves to Tag Shenanigans, to give up on some or other pesky assets, to run the wrong hell server to find a popped Jackson . PE is just a distilled lesson in kiting runs that I’ve found wildly transferable to less limited focus decks.

Do you know a good PE deck to use for this kind of practice?

Deck that requires you read the pace of the game, and doesn’t use advanceable traps. Rather, you use baiting and Psychic Fields, as well as installing the odd Snare to score agendas and grind the runner our. 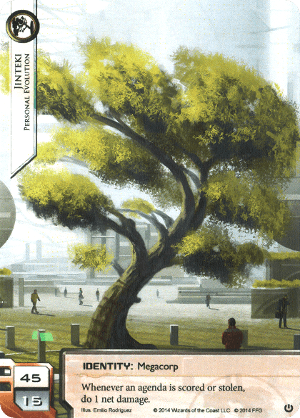 Thank you! I will give these a try as I work through the fundamentals. Working on the basics of running with Adam and of rush scoring with NEXT right now.

Thanks for these suggestions. I’ve been playing Adam and NEXT rush the last few days. It has been interesting.

Just today, I experienced NEXT rush Nirvana. I won a game in 6 turns and only rezzed one piece of ice the whole game. And, in truth, that rez was a mistake.

I’ve been running a NEXT deck for a while now, and you learn a lot about the speed of the game by playing it. Great to hear it’s working out.

Well, once. Been wrecked a few times, too.